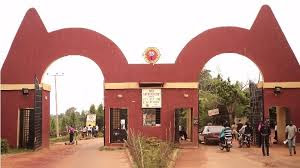 The management of the Auchi Polytechnic has expelled three former members of the Students Union Government in the institution for alleged misconduct.

The Acting Rector of the polytechnic, Dr. Sanusi Jimah, made this known on Monday in a statement signed by the Public Relations Officer, Mr. Mustapha Oshiobugie.

The affected students include a former president of the SUG, Mr. Samson Okoduwa; former secretary-general, Obukowho Oghenerume, and a former speaker of the union, Unuareleokpa Patrick.

The polytechnic had in October proscribed the union, following what it described as the alleged threat by the erstwhile executive members of the students body to disrupt its second semester examination in protest over the postponement of the SUG elections by the school.

The institution, in the statement, accused the affected students of allegedly parading themselves as union officials during the examination, in spite of the ban.

It alleged that the students led some hoodlums to disrupt the first paper of the second semester examination and refuse to hand over the property of the union that was in their possession.

The management of the polytechnic also alleged that the expelled students engaged in a series of activities that had brought disrepute to the institution.