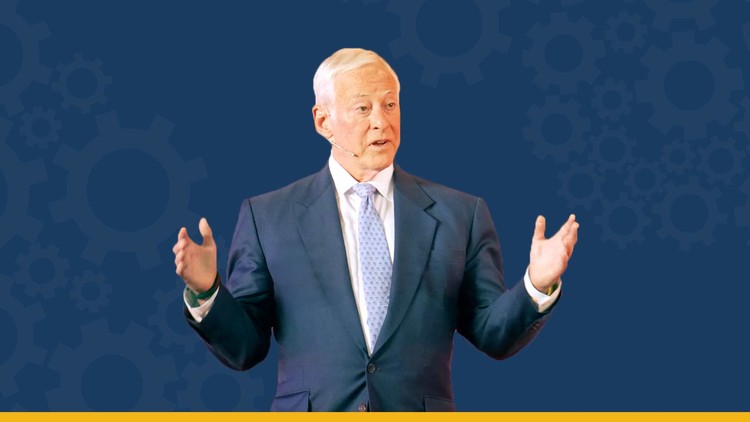 Brian Tracy is a famous Canadian/American motivational speaker, entrepreneur, investor, public speaker and self-development author. He has written more than seventy books that have been translated into many languages. He was born on 5th January 1944 in Charlottetown, Canada. He is currently 74 years old. His most popular books include Earn What you are Really Worth, The Psychology of Achievement and Eat That Frog!

Brian Tracy completed his education at the University of Alberta. He is currently the chairman and chief executive officer (CEO) of Brian Tracy International, a company which he founded in 1984 in Vancouver, Canada. The company specializes in the training and development of individuals and organizations. In 1979, Brian Tracy got married to his wife Barbara Tracy and the marriage is currently blessed with two lovely children namely Michael Tracy and David Tracy.

Brian Tracy is currently the leading coach on the topics of Leadership, Selling, Self-Esteem, Goals, Strategy, Creativity and Success Psychology. Throughout his 40 years career as a public speaker and a business consultant, Brian Tracy has helped more than one thousand companies and has addressed more than five million people in different public speaking engagement and seminars throughout the United States of America, Canada and 70 other countries worldwide.

Brian Tracy has written and has sold more than 70 books; his most successful book is Eat That Frog, a book which happens to be a New York Times Best Selling book. In addition to this achievement, Brian Tracy has also written and produced more than 500 audio and video learning programs. One of his greatest and bestselling books of all time is Psychology of Achievement, a book that has been translated into more than 28 languages.

Brian Tracy has acted in Hollywood movies. One of the popular movies he has acted includes “Secrets of Self-Made Millionaires”. Prior to founding his company, Tracy Brian has served as the Chief Operating Officer of a development company. He has also served as the President of three companies with headquarters in Solana Beach, California in the United States of America.