Anthony Jay Robbins Mahavoric popularly known as Tony Robbins is a famous American motivational speaker, author, entrepreneur, investor, philanthropist and a life coach. He was born on 29th February 1960 in North Hollywood, California in the United States of America. He is currently 58 years old. He is the eldest child in a family of three children. His parents got divorced when he was just 7 years old.

His mother then had a series of husbands, including Jim Robbins, a former semi-professional baseball player who legally adopted Tony Robbins as his son when he was just 12 years old. He is known worldwide for his public speaking engagement, seminars and self-help books. His best selling self-help books include Unlimited Power and Awaken the Giant Within.

During his high school days, Tony Robbins grew ten inches, a growth which later resulted to a pituitary tumor. However, during an interview, he stated that his home life was “chaotic” and “abusive”. When he was just 17 years old he left home and never returned again. After completing his high school education Tony Robbins could not proceed further to college due to financial problems. He did not attend college, instead he worked as a janitor.

Tony Robbins is the founder of several companies that earn approximately $6 billion in annual sales. In 2015 and 2016 he was listed on the Worth Magazine Power 100 list. Tony Robbins is also a humanitarian and an active philanthropist, partnering with organizations such as Feeding America. 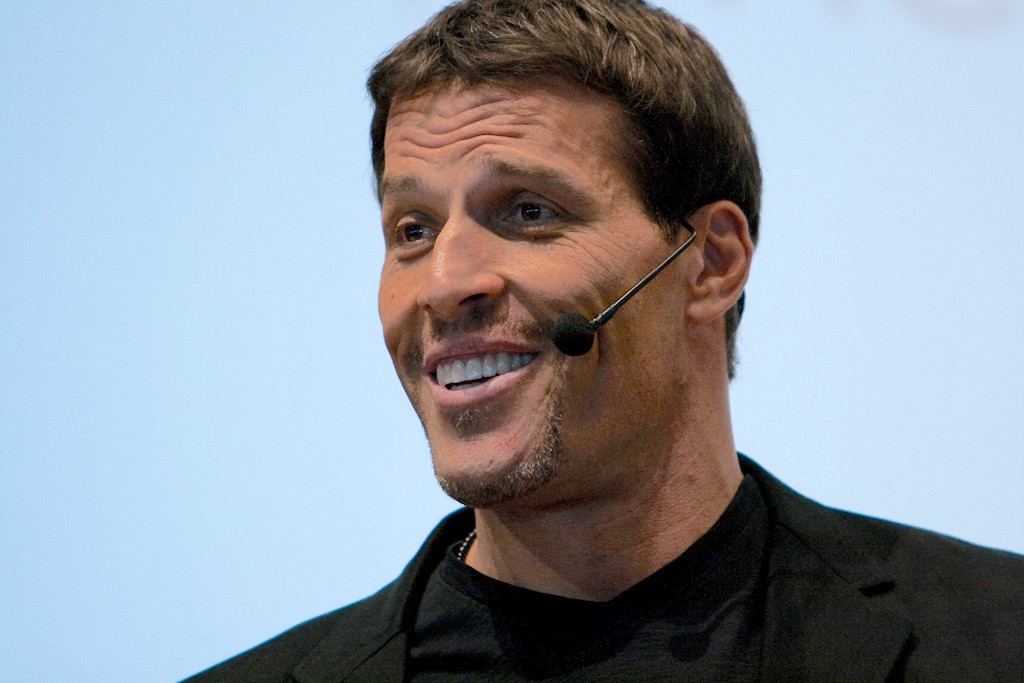 Tony Robbins began his career promoting seminars for motivational speakers and late Jim Rohn when he was just 17 years old. In 1988, Tony Robbins released his first infomercial and Personal Power audiotapes, produced by Guthy Renker, which helped to promote his services as a “peak performance coach”.

In 1997, Tony Robbins began the Leadership Academy seminar, where he worked as a speaker on the seminar circuit sponsored by Learning Annex. In 2007, Tony Robbins was featured as a speaker at the 2007 Technology, Entertainment and Design (TED) conference. It was reported that over an estimated number of 4 million people have attended his live seminars and public speaking engagement. Tony Robbins collaborated with Cloe Madanes to found the Robbins Madanes Center for Intervention. An organization that trains life skills coaches to help families and individuals deal with addiction and other issues.

In 2014, Tony Robbins, along with a group of investors which include Magic Johnson, Mia Hamm and Peter Guber acquired rights to launch a Major League Soccer franchise in Los Angeles, California in the United States of America. The league soccer franchise in Los Angeles, California is currently referred to as the “Los Angeles Football Club”. The soccer team is however scheduled to begin competition in 2018.

As of 2017, Tony Robbins has already written five books, and four of them were regarded as best-sellers, including his famous books Unlimited Power and Awaken the Giant Within. In 2014, due to the financial crisis that cost many Americans their retirement savings and led many to poverty, Tony Robbins decided to published one of his bestselling book Money: Master the Game, which peaked at no. 1 on the New York Times best-selling list in December 2014.

Tony Robbins in his seminar speaks more about various human needs, influences that affect people, the power of making decisions and the need to achieve emotional mastery. Tony Robbins holds multiple seminars annually which include Unleash the Power Within, Date with Destiny, Life and Wealth Mastery, Business Mastery and Leadership Academy.

In 1991, Tony Robbins founded the “Anthony Robbins Foundation” a charity organization which is aimed at helping individuals and organizations who are physically challenged, homeless, hungry, and disable to make a difference in the quality of their life.

In 2014, Tony Robbins donated the profits of his bestselling book Money: Master the Game, along with an additional personal donation, through Feeding America to provide meals to people in need. According to the charity, the combined donation has fed more than 100 million people who are in need as of 2014 – 2015.

In 2016, Tony Robbins partnered with the charity again to provide over 100 million more meals to people in need. On 2nd February 2017, Feeding America announced that the 100 Million More Meals Challenge, conducted in partnership with Tony Robbins, have helped to provide more than 101.6 million meals to children and families in need through the Feeding America’s network of 200-member food banks in 2016.

Tony Robbins is also an actor and has played several cameo roles in the films like Reality Bites, The Cable Guy and the 2001 film Shallow Hal. He also appeared in the movie “The Roseanne Show” and an episode of “The Sopranos”. In 2010, he acted in the 2010 documentary film titled “The Singularity is Near: A True Story about The Future”. In 2015, Hollywood film maker Joe Berlinger directed and produced the documentary “Tony Robbins: I Am Not Your Guru” a documentary movie about Tony Robbins event “Date with Destiny”.

Tony Robbins is currently one of the richest and most influential motivational speaker and personality in the United States of America with an estimated net worth of $480 million.